(Interjection- THIS SITUATION is exactly WHY we emphasize “THE CONTRACT” on this website: the contract that ALL military members sign, enlistees and officers. These ex-Navy officers understand WHAT an illegal order is, while the usual high school enlistee, which also constitutes the DHS troops conducting tRump’s “street clearing operation” DO NOT… any more than tRump, Cadet Bone Spurs, does… This situation can lead to MANY atrocities when ill-intentioned officers such as tRump give orders that the average high school enlistee, from basic training through military custom and lifestyle, is trained to obey without questioning. ~ Don Chapin) 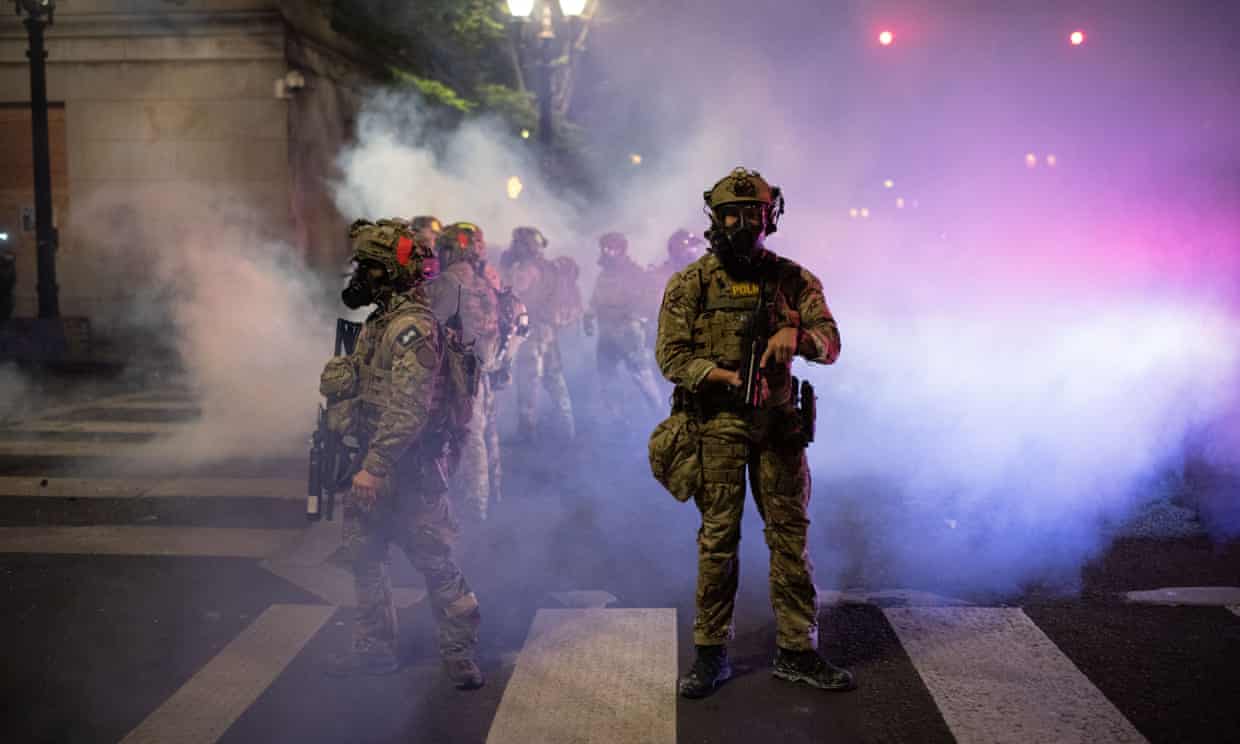 The Black Lives Matter protest in Portland looked to be winding down last Saturday night when US marine corps veteran Duston Obermeyer noticed a phalanx of federal officers emerge from the federal courthouse.

They shot teargas at the crowd and pushed a protester to the ground with such force that, Obermeyer said, she slid 6ft across the pavement.

The 42-year-old had driven about 40 minutes from his home in the Molalla area for his first protest after hearing the many recent reports of federal personnel in tactical gear emerging from unmarked cars with automatic weapons to pick up protesters. His plan was to observe first-hand what was happening.

But in that moment, he said, he realized he couldn’t stand by and simply watch.

In a Pokémon hat and Superman T-shirt, and with a cotton mask protecting his face, the 6ft 4in, 275lb man walked up to the officers and asked whether they understood their oath to defend the constitution.

Above should show a tweet with video from the protest the night US navy veterans Chris David  and Duston Obermeyer were attacked by anonymous Federal officers. Find it on Twitter here: https://twitter.com/LauraCranehill/status/1286375226247282688?s=20

“They are not supposed to be coming and attacking protesters,” Obermeyer told the Guardian. “They didn’t even give any warning, there was no ‘hey you need to move’, ‘hey back up’. There was basically them walking out and assaulting a protester just to prove that they could.”

Just a few feet away, Obermeyer was aware of another man, US navy veteran Chris David, asking virtually the same question.

Despite both being graduates of the naval academy, David is 11 years older and thus the pair had never met. But after more than 50 consecutive days of anti-racism and anti-police brutality protests in Portland, following the killing of George Floyd by police officers in Minneapolis, and the recent deployment of militarized federal agents by Donald Trump, both veterans had decided simultaneously now was the time to start asking questions.

“I’m not a big believer in coincidence,” said Obermeyer. “I believe that we both have similar feelings because we come from similar places and we truly believe in the constitution as it’s currently written and as it’s taught in grade school. And this is a violation of constitutional rights.” (my bolding ~ Don Chapin)

David, who came dressed in a Naval Academy sweatshirt and Navy wrestling hat, told the Guardian he believes they both came out that day because of their time at the naval academy, which instills “a deep level of integrity” in graduates. But also, he said, for perhaps an even simpler reason.

“We have the ability to see what is right and what is wrong. And what we both saw was wrong and we wanted to go out there and talk to those officers.”

Obermeyer also asked the officers whether they understand what an illegal order is, referencing the fact that military officers are required by law to disobey illegal or unconstitutional orders. (Negative, this is the responsibility of EVERY military member, per the universal CONTRACT, not just officers!! ~ Don Chapin)

“Assaulting an unarmed protester who is exercising their first amendment rights is illegal, that’s an illegal order,” he said.

That’s when teargas was fired on the two men. When that didn’t deter them, Obermeyer said an officer tried to hit him with a baton, but he caught it and quickly pushed him back. Another officer repeatedly beat David with a baton, breaking his hand in two places, an injury that will require surgery on Monday. He was also sprayed in the face with a white chemical irritant that he said “felt like flaming gasoline.”

Obermeyer recalls an officer sticking an automatic weapon in his face, while another shot him at point-blank range with an orange chemical irritant.

After serving in the marine corps for over a decade, including as an officer, Obermeyer has experienced being gassed many times. In this case, he wasn’t sure what they had used because, he said: “I’ve never felt worse than I did that night after being sprayed in the face.”

His eyes and nose almost immediately closed up, and he started having a difficult time breathing. His clothes were drenched, and he said it felt like his skin was on fire. Others in the crowd guided him a block away and helped him flush out his eyes. It took him three days to recover.

Oregon’s governor, Kate Brown, and Portland’s mayor, Ted Wheeler, have repeatedly denounced the presence of agents from the Department of Homeland Security (DHS), the US Marshals Service and the border patrol.

Meanwhile, inspired by the events last Saturday, “Wall of Vets” groups have formed in Portland and at least five other cities across the country, similar to the walls of moms and dads, who stand in lines to protect the protesters. 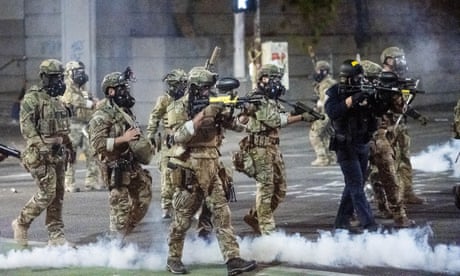 The DHS said in a statement Wednesday that federal law enforcement officers are working “diligently and honorably to enforce federal law by defending federal property and the lives of their fellow officers” as “violent anarchists continue to riot on the streets of Portland”. The DHS and Portland police did not respond to a request for comment.

David said the officers’ response Saturday night to a largely peaceful crowd was completely disproportionate. But he said, it was also clear that they were not trained for this type of situation.

“They have no tactical cohesion to what they’re doing,” he said. “Duston and I are vets. We can tell what’s going on with these guys. There was no sort of command. They were running around and they were scared.”

As he watches the protests continue to balloon, Obermeyer believes the federal officers are actually “creating the situation that they are saying they have to be there for”. (my bolding ~ Don Chapin)


“There are more protesters as we move forward,” he said. “Things should be kind of winding down at this point and they’re not because federal officers are there antagonizing and creating the situation not dealing with it.”

Chad Wolf: who is the Trump official leading the crackdown in Portland? (https://www.theguardian.com/us-news/2020/jul/24/chad-wolf-who-is-he-portland-protests-trump-official-homeland-security

Download the pdf file below to read at your convenience: