(Interjection – this article’s phrase, “the fighter jock culture, prevalent in the 1970s and ’80s” rang a HUGE bell with me!! When I graduated with an engineering BS at Oklahoma State in 1967, I had various fighter jock classmates, most being Vietnam vets, that were in a mandated USAF program to get a degree. Every officer was to have at least a bachelor’s degree but at the time few did. With my BS, there was strong pressure to apply for pilot training, but I was strongly “turned off” by the callousness and macho attitude of several of those classmates. Therefore, when the USAF offered an MS at the same university, I grabbed it. Pilot training would have locked me in a cockpit for five years without the potential of an advanced degree, and coupled with my internal reactions to “the fighter jock culture” the decision became a no-brainer. ~ Don Chapin) 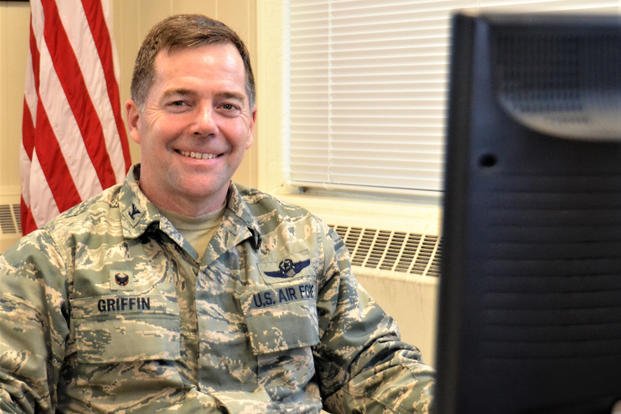 A colonel in charge of an Air National Guard MQ-9 Reaper wing in Pennsylvania has retired despite news reports that a “frat-boy atmosphere” — including crude and sexist behavior — ran rampant in the unit.

Col. William Griffin of the 111th Attack Wing retired earlier this month, in line with his mandatory retirement date based on age and service, spokeswoman Maj. Nicole Reigelman told Military.com on Wednesday.

A Philadelphia Inquirer investigation last summer reported that Griffin fostered a “vindictive culture of unprofessional retaliation,” according to a fellow commander at Horsham Air Guard Station. The extensive investigation detailed allegations of sexual harassment and discriminatory behavior, which Griffin allegedly fostered from the time he took over the wing in December 2017.

“The Pennsylvania Air National Guard is unable to comment on the status of any investigation into the wing; however, per Air Force regulation, a member who has retired may still be subject to action as an outcome of an adverse finding of an investigation,” Reigelman said in an email. Task & Purpose was first to report the news of Griffin’s retirement.

Reigelman stressed that no one at the wing is under investigation for sexual misconduct. However, “leadership is aware that there is a small group of former and current members who are frustrated by their experience with the wing.”

“The overwhelming majority of the 111th’s airmen are proud of the work they do, and find the wing to be a healthy and fulfilling workplace,” she said. “This is demonstrated by the 111th’s unprecedented retention rate, which is the highest in the state. Additionally, the 111th Attack Wing has been recognized repeatedly for excellence, earning multiple Meritorious Unit Awards and Air Force Outstanding Unit Awards over the past several years.”

Col. Deane Thomey, who most recently served as head of the Air National Guard Director’s Action Group at the Pentagon, has been named the new wing commander; an assumption-of-command ceremony will take place in the near future, Reigelman said.

Former and current personnel told The Inquirer that harassing comments, both sexual and sexist in nature, were seen as jokes or dismissed entirely.

“[That] doesn’t happen here” was the base leadership’s attitude, one technical sergeant told the newspaper.

Another service member, a former victim’s advocate, told The Inquirer that, when she began her assignment, other women told her to “never wear leggings or tight-fitting clothing” and to “leave and slip away” anytime there was alcohol present, the paper reported.

Marianne Bustin, who served as the wing’s sexual assault response coordinator, told Task & Purpose that the fighter jock culture, prevalent in the 1970s and ’80s, never left the unit even as reports of sexual assault and harassment in the armed forces continue to increase year to year. Bustin was fired from her position last June, then became a whistleblower on the command’s culture.

Bustin recalled being mocked, berated or ignored when she tried to hold training sessions on sexual assault, harassment and violence. During one session, she said she asked the attendees what they would do if they spotted someone slipping drugs into a woman’s unattended drink.

“They were like, ‘Rape her!’ and people started laughing,” said a technical sergeant who observed the session, according to The Inquirer. The tech sergeant, who asked to remain anonymous, said another airman yelled out, “Give her more drugs!”

Last month, more reports of misconduct in Guard units surfaced with similar allegations — even in the wake of the 2017 #MeToo movement, which revealed predatory behavior, harassment and assault by men in positions of power across many industries.

Through a joint investigation, The Milwaukee Journal Sentinel and The Capital Times found that women across multiple Guard units faced scrutiny, retaliation or were fired if they reported sexual harassment or assault.

The Pentagon has attempted for years to improve its sexual assault and harassment prevention programs across the military, as well as the services’ handling of reports and prosecutions.

With Defense Secretary Lloyd Austin at the helm, the department is working on ambitious plans to help prevent assault and harassment in the ranks.

Last month, the Defense Department’s anti-sexual assault and sexual harassment commission aid it hoped to produce “major shifts” in how the military cares for victims and holds offenders accountable.

Commission chairwoman Lynn Rosenthal said the Independent Review Commission will look at what hasn’t been tried to stop sexual violence in the military and will send recommendations for sweeping changes in how the military tackles this problem to Austin and President Joe Biden.

The commission was given 90 days to produce initial recommendations, primarily on how to hold offenders accountable. Rosenthal and her team are expected to present options by May 27.

“Every member of the total force deserves a workplace free of sexual assault and harassment and personal fear,” Pentagon Press Secretary John Kirby said when the commission’s role was announced Feb. 26. “We must commit ourselves to eliminating this illegal and corrosive behavior.”

— Stephen Losey contributed to this report.

If the pdf file below does not display, please use this link.