This post contains two reposted articles from militarytimes.com suggesting that if you enlist you may be endangering your life, not from the combat risks one would expect, but from negligent contamination on bases in the US and overseas by military contractors. Worse, you could put your family (or future family) at risk for often fatal illnesses, too. Unfortunately, you may not be able to find any help, even from the US Supreme Court. :

What will the Navy’s denial of Camp Lejeune claims mean for other contaminated bases? 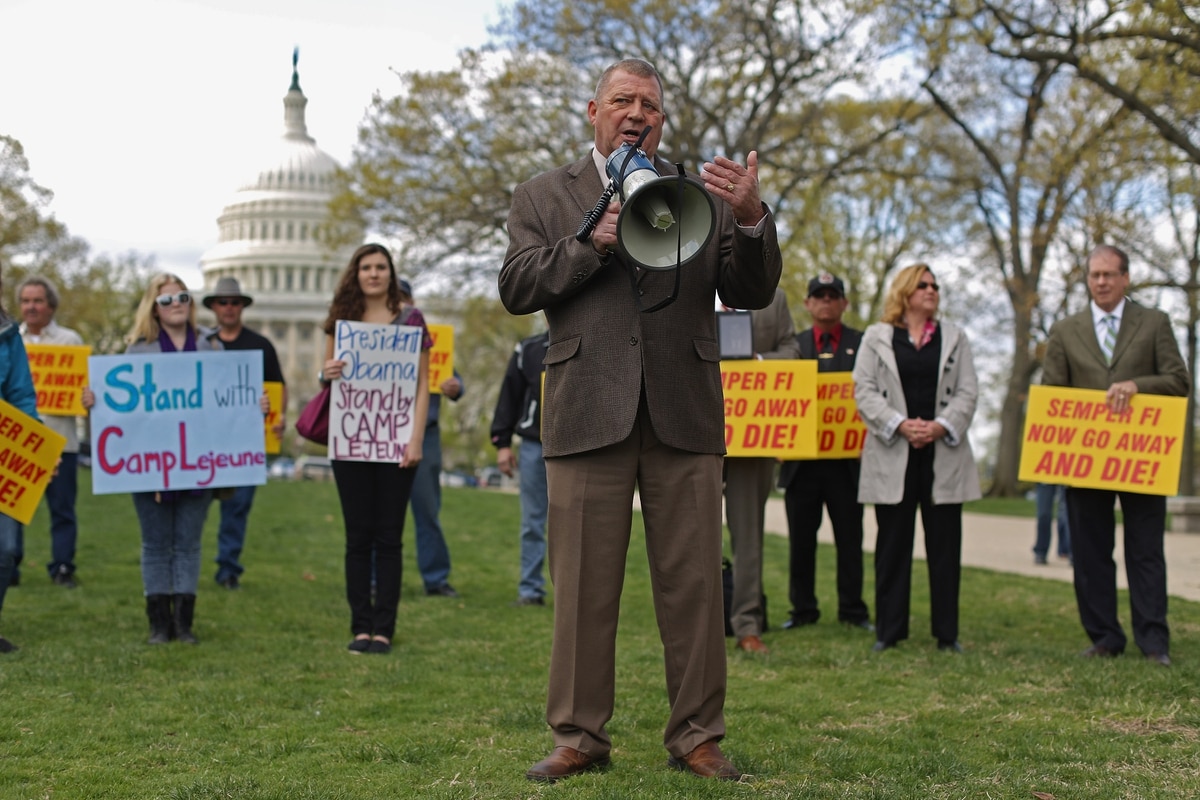 Retired Marine Corps Master Sgt. Jerry Ensminger addresses a 2014 rally in Washington about the causes of Camp Lejeune’s contaminated water supply. It was revealed in the 1980s that Camp LeJeune had one of the most contaminated public drinking water supplies ever discovered in the United States. Ensminger helped uncover the contamination after his 9-year-old daughter died of leukemia. (Chip Somodevilla/Getty Images)

The Navy’s announcement Thursday that it would deny 4,400 claims from Marines and their families who say contaminated water at Camp Lejeune caused cancers and other serious illnesses raised the question of whether any affected military community could ever be compensated for the ailments they now face.

On Thursday, Navy Secretary Richard Spencer said that despite the Navy’s acknowledgement there were harmful cleaning solvents and fuels that may have been connected to cancers found in Camp Lejeune personnel from 1953 to 1987, he decided this week to deny claims from those Lejeune lawsuits. In all, the claims sought $963 billion in damages.

Spencer’s announcement seemed to end the families’ quest — at least on the military front ― to seek damages.

“I am perfectly cognizant of the fact this will be a disappointment to the claimants,” Spencer said, “However it would be a disservice … to hold the claims without a decision or a way forward.”

DoD: At least 126 bases report water contaminants linked to cancer, birth defects: The water at or around 126 military installations contains potentially harmful levels of perfluorinated compounds, which have been linked to cancers and developmental delays for fetuses and infants. By Tara Copp

Spencer cited three reasons the Navy decided to deny the claims: That recent court decisions found the contamination at Camp Lejeune, North Carolina, did not meet the conditions to grant a waiver to allow affected members to sue the government under the Federal Tort Claims Act; that service members themselves could not sue because of the Feres Doctrine; and that the spouses and dependents of service members who could have sued the government for their own cancers have likely passed the time frame in which they could have filed a case. The Navy has been considering the Camp Lejeune issue for 20 years.

“This is a difficult decision, to be very frank with you,” Spencer said. “Kicking it down the road provided no help whatsoever.”

Service members and defense civilians who served at other contaminated bases worried that the Lejeune decision will set more precedent.

“Unfortunately I did hear about Lejeune,” said Kristen Emery, who grew up at Patrick Air Force Base and survived Hodgkin’s lymphoma, one of scores of cancer cases around the Florida military base. “It is such a sad situation! I was able to get copies of the court proceedings from back in 1990. I spoke to an attorney and after they investigated it, they discovered that my case was not withdrawn in time so I am not able to pursue another case.”

Scores of Patrick residents died young from various forms of cancer. The Navy’s announcement, to Emery, is the latest sign that the military’s protections through the Feres Doctrine and other exemptions have meant “they are literally getting away with murder. They’ve known it and refuse to do anything about it,” Emery said.

More reasons to be worried about cancer-causing chemicals on military bases: Fears of contaminated water near military bases grow as the federal government refuses to release new study about dangerous chemicals. By: Tara Copp

Frank Vera, a former weapons systems specialist at the contaminated and now closed Superfund site George Air Force Base in California was similarly critical. A community of cancer survivors at both bases have evolved, with people wondering what the military knew, and what it can do to help now.

But Congress may be stepping in. On Friday, Rep. Jackie Speier, D-Calif., announced her personnel subcommittee would be looking at potential legislative fixes for the Feres Doctrine, which could have broad implications for the military’s ability to sue the government when injured.

Spencer stressed that the service members will still have full VA assistance for treatment for Camp Lejeune-related illnesses. But as far as what other remedies might be available, particularly for spouses or children of service members who grew up at Lejeune, the Navy secretary didn’t know what they might be able to do besides potentially work with Congress on a solution.

That still leaves the lawsuits. On Friday, attorneys for some of the plaintiffs in the Camp Lejeune cases said the Navy’s announcement would have a chilling effect on other communities’ efforts to seek compensation, which may have been the intent.

DoD explains what’s being done about water contamination on bases: Here’s what the data in DoD’s water charts means for service members. By Tara Copp

The Navy’s announcement that “’We will not be paying our claims’ — that alone is going to deter people from filing a claim that they may have,” said Daniel Maharaj of the Whistleblower Law Firm, which represented some of the Lejeune clients.

Hundreds of communities across the U.S. face groundwater contamination from chemical compounds that were used in military firefighting foam and are linked to cancers, birth defects and other illnesses. The Navy’s decision on Lejeune should not keep those communities from moving forward, said Natalie Khawam, the founder of the Whistleblower Law Firm.

“File the claim. Despite what the news of the day is, that’s not a court decision. Don’t let a non- court decision out there deter you from filing your claim,” Khawam said.

Even if those communities proceed their own lawsuits, their priority should be making sure the illnesses they are facing get linked to their service at a contaminated base, said Michael Hoffman, an attorney at Gordon & Partners who also represented Lejeune plaintiffs.

“What I tell people is file for everything, file right away,” Hoffman said. Affected veterans should be “actively and aggressively pursuing their VA benefits.”

Hoffman said his firm represents veterans as their claims are heard by a VA’s review board, and has recently been working to get additional illnesses included for treatment, such as adding mental health assistance.

Hoffman said moving forward, he doubts there will be a case like Camp Lejeune, where it is been difficult to connect potential illnesses to government negligence, because of a lack of documentation which could have helped the veterans.

“I think in the future it will be a lot easier” to prove the negligence, Hoffman said, “Because records are a lot harder to make go away” now that they are all electronic. Other affected service members, such as women who were told “Don’t get pregnant at George Air Force Base” in the 1970s and 1980s have previously told Military Times their medical records have been lost entirely, or have missing files.

For example, in the past when a child was born with deformities, “back then you just thought you had bad luck,” Hoffman said. Now, “I think people are going to be investigating much sooner.”