Many Jobs Feel Meaningless Because They Are 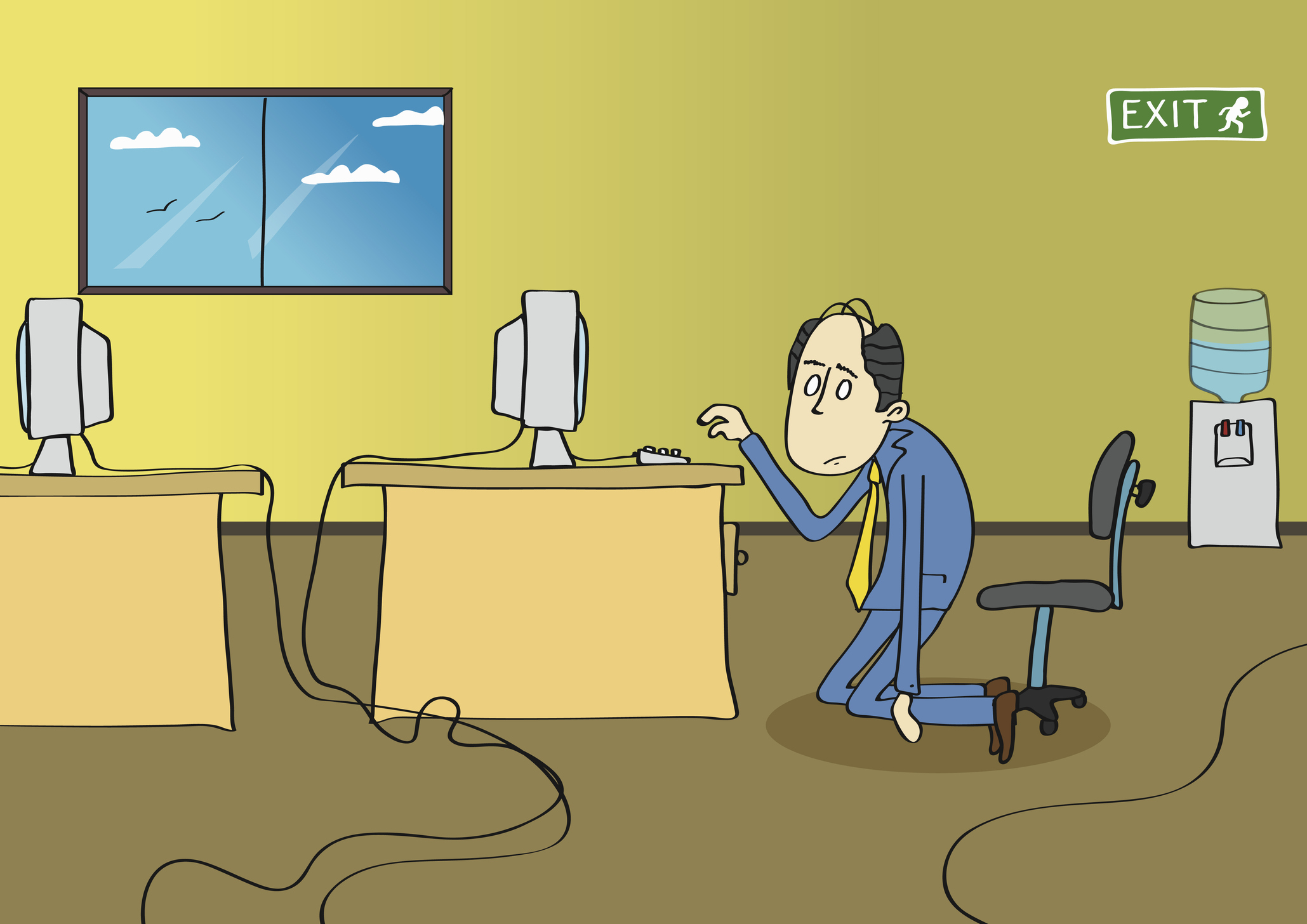 Are we creating value yet? Illustration by Oscar Armelles / Ikon Images.

(Interjection by Don Chapin: Personal experience to point up the objective of this article… as a government watchdog Systems Engineer to the manufacture of the back end of the F-18 aircraft for the Navy at Northrop-Grumman, in Los Angeles, California, I found it rather humorous to observe the growth of a whole new staff department, based on the success of one bright and inquisitive ex-Navy pilot that was retiring. The company CEO, being an ex-Navy pilot himself, apparently decided the more the better as a plethora (between four and five) of ex-Navy pilots were hired to replace the one who retired. But quantity does not replace quality and in the time I was able to observe the performance of this group, who knew absolutely NOTHING about manufacturing problems – which, I suspect, was also true of the CEO, – their collective contributions amounted to Zilch, aside from occupying meaningless desks, supported by a DoD contract which, in turn, was supported by our tax dollars.)

As earnings season is upon us, it’s worth asking: Does business create value these days the way it once did?

One sign it doesn’t is a significant decline in the formation rate of U.S. firms over the past few decades. Economists Peter Orszag and Jason Furman have argued that investment and innovation have taken a back seat to profits derived from economic rents. Political factors also increasingly appear to play a major role in driving corporate profits, as new regulations help incumbent firms, another strike against economic efficiency.

What’s going on? Surprisingly, one of the more convincing explanations comes from an anthropologist who has looked beyond narrow economic reasoning to examine the actual social or psychological functions served by many of the jobs in today’s service and knowledge economy. David Graeber of the London School of Economics argues in a 2018 book that the prevailing myths about the efficiency of capitalism blind us to the fact that much of economic reality is shaped by jockeying for power and status and serves no economic function at all.

Of course, the idea that business might be wasteful isn’t new. Thirty years ago, economist William Baumol suggested that the future of capitalism might well belong to unproductive businesses, which use power and influence to profit without necessarily benefiting society. He worried about the rise of “unproductive entrepreneurs” who buy up rivals or use regulations to stifle competition, thriving as parasites on productive parts of the economy. Recently, economists Robert Litan and Ian Hathaway reviewed evidence documenting such a trend, especially over the last 30 years.

Of course, the financial crisis rather crushed the notion that modern markets are models of economic efficiency and value creation. Much of the supposedly sophisticated financial engineering only served to hide risk, or dump it on unsuspecting investors, and often acted to amplify risks overall though it was advertised as doing the opposite. A 2012 review of financial markets funded by the U.K. government concluded that lots of finance is senseless zero-sum activity that drains investment away from useful enterprise.

But even outside of finance, a lot of today’s business seems to aim less to produce economic value than to grab a bigger share of existing wealth. MIT economist Xavier Gabaix has shown that the wealthiest individuals in recent years really have skewed the playing field in their favor, finding ways — such as access to better information, legal or tax planning services — to capture more of the profits coming from productive work. Luigi Zingales has argued that the behavior of businesses has changed as corporations have grown so large. Large corporations now see wielding political influence through campaign donations or lobbying as a major part of securing their economic advantage.

Graeber’s unique contribution is to tie these changes to human history, and to explain why, anthropologically, they may not be all that surprising. In a 2013 essay, he made the seemingly bizarre assertion that perhaps as many as 30 percent of all jobs actually contribute nothing of use to society. It might seem an obnoxious claim, if not for the fact that a huge number of people willingly attest to the worthlessness of their own jobs. A 2015 U.K. survey found that 37 percent of people felt their jobs “did not make a meaningful contribution to the world,” and a later poll in the Netherlands found 40 percent saying the same thing.

Perhaps even more surprising is the nature of these “bullshit” jobs, as Graeber calls them. They aren’t in teaching, cleaning, garbage collecting or firefighting, but seem mostly to be in the professional services sector. Since writing his essay, Graeber says he has been contacted by hundreds of people saying they agree — they work in pointless jobs which could be eliminated with absolutely no loss to society — and they’ve come mostly from human resources, public relations, lobbying or telemarketing, or in finance and banking, consulting, management and corporate law. Of course, neither Graeber nor anyone else can be a final judge which jobs are useful or not, but the people who offer this view of their own jobs come most frequently from the service sector.

Consider the case of Eric, a history graduate hired to oversee a software project ostensibly intended to improve the coordination of different groups in a large firm. Eric only discovered after several years on the job that one of the firm’s partners had initiated the project, but that several others were against it and were acting to sabotage its success. His job — and that of a large staff hired beneath him — was a meaningless effort to put into place a change that most of the company didn’t want.

Another example Graeber provides in the books is of a senior manager for one of the big accounting firms hired by banks to oversee the disbursement of funds for claims against mis-sold insurance. The company, this manager claimed, purposefully mistrained accounting staff and saddled them with impossible tasks so the work could not be done in time and the contract would need to be extended. In other words, the job was intentionally structured so as to siphon off as much of the available funds into the accounting firm, which placed itself as a machine of extraction between the funds and their intended recipients.

These examples are typical, Graeber argues, of jobs generated naturally out of the corporate managerial struggle for influence, status and control of resources.

This is a long way from true capitalism, as Graeber notes, and actually looks more like classic medieval feudalism. Much within the modern corporation is less about making things or solving problems and more about the political process of gaining control over the flows of resources. The result is a proliferation of jobs that actually serve very little if any economic function, and only make sense from the perspective of rent seeking and power relations. Many like to laugh at the absurd inefficiencies of the Soviet Union, where so many people only pretended to do useful work, yet this may be significantly true in Western economies as well (only in the West they actually get paid for it).

From this perspective, maybe we’ve been thinking about the modern business world in completely the wrong way. And perhaps slowing productivity shouldn’t be a surprise. They may only reflect an approach based solely on profit maximization, rather than an authentic effort to solve human problems.

Mark Buchanan, a physicist and science writer, is the author of the book “Forecast: What Physics, Meteorology and the Natural Sciences Can Teach Us About Economics.”

This column does not necessarily reflect the opinion of the editorial board or Bloomberg LP and its owners. For more columns from Bloomberg Opinion, visit http://www.bloomberg.com/opinion.