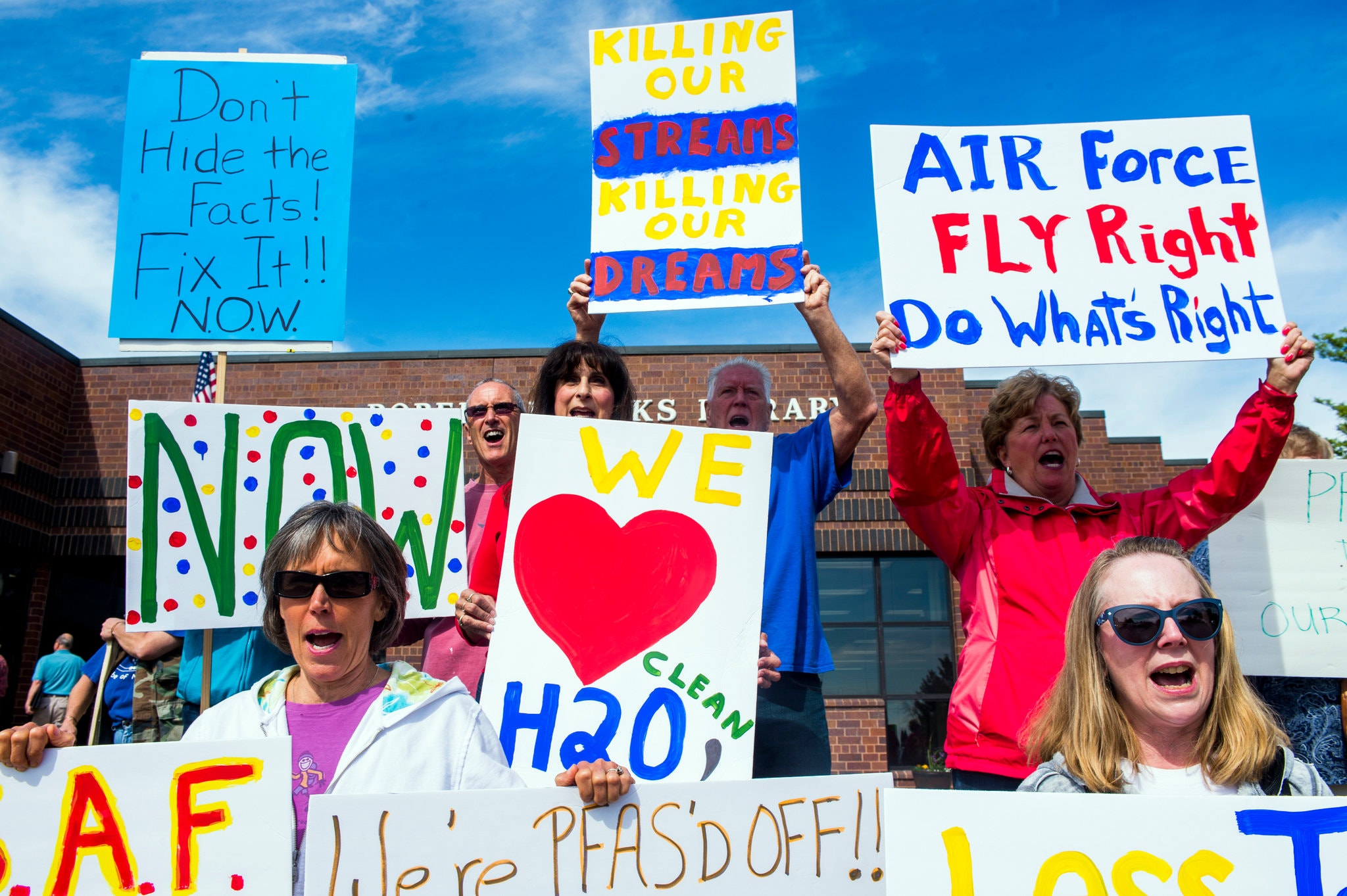 Demonstrators in Oscoda, Mich., last year. The use of PFAS has polluted drinking water, lakes, rivers and wildlife, and is causing toxic foam to gather on local beaches.Credit Jake May/The Flint Journal, via Associated Press

WASHINGTON — Facing billions of dollars in cleanup costs, the Pentagon is pushing the Trump administration to adopt a weaker standard for groundwater pollution caused by chemicals that have commonly been used at military bases and that contaminate drinking water consumed by millions of Americans.

The Pentagon’s position pits it against the Environmental Protection Agency, which is seeking White House signoff for standards that would most likely require expensive cleanup programs at scores of military bases, as well as at NASA launch sites, airports and some manufacturing facilities.

Despite its deregulatory record under President Trump, the E.P.A. has been seeking to stick with a tougher standard for the presence of the chemicals in question in the face of the pressure from the military to adopt a far looser framework.

How the administration resolves the fight has potentially enormous consequences for how the United States is going to confront what a top official at the Centers for Disease Control and Prevention has called “one of the most seminal public health challenges” of the coming decades.

The problem is not limited to military bases. An estimated five million to 10 million people in the country may be drinking water laced with high levels of the chemicals, known as Per-and polyfluoroalkyl substances, or highly fluorinated chemicals. They include thousands of people who live near military bases in states including Michigan, Pennsylvania and Massachusetts.

PFAS, as the chemicals are most commonly called, are present in a vast array of products, including food packaging, nonstick pans, clothing and furniture. They have been linked in recent years to cancers, immune suppression and other serious health problems.

But since the 1970s, the Defense Department has been one of the most frequent users of PFAS. The chemicals are a key ingredient in firefighting foam employed at bases nationwide, with military crews spraying large amounts during training exercises (and on emergency calls) into unlined basins that drain into the soil and then into groundwater.

In 2017, after military communities around the country began to report alarming levels of PFAS in their drinking water, the Pentagon confirmed that there were 401 known military facilities in the United States where it was used.

Further study by the Pentagon concluded that the PFAS contamination had turned up in drinking water or groundwater in at least 126 of these locations, with some of them involving systems that provide water to tens of thousands of people both on the bases and in nearby neighborhoods. In some instances, the Defense Department is providing temporary replacement water supplies.

The military and many airports nationwide have relied on PFAS- based firefighting spray because it can more quickly put out liquid fuel fires and it works when mixed with both fresh water and seawater.

The Defense Department has been moving in recent years to phase out the use of the most worrisome version of these chemicals and replace them with a formulation that does not break down in the environment as easily or build up as much in the bloodstream if it ends up in drinking water. But this replacement chemical is also generating health concerns.

The E.P.A. — after intense criticism from communities facing contaminated water, as well as from both Democrats and Republicans on Capitol Hill — is moving toward creating two new PFAS standards to address the problem nationwide.

The first would establish guidelines for when cleanups will be required at federally controlled sites to try to prevent that contamination from reaching drinking water supplies.

The second would set a legally binding, maximum allowable drinking water level for PFOS and PFOA, two of the most common forms of PFAS. Separately, the E.P.A. is preparing to designate these chemicals hazardous substances, meaning areas contaminated can be designated Superfund sites, formalizing the cleanup effort.

The E.P.A. completed its work on the first step, the proposed groundwater cleanup standard, last August, and transferred it to the White House Office of Management and Budget for approval, with a prediction that it would be finalized and made public by last fall.

But federal officials briefed on the negotiations, including the office of Senator Thomas R. Carper, Democrat of Delaware, the ranking member of the Senate committee that oversees the E.P.A., said major objections were raised by the Pentagon, as well as by NASA, another major user of PFAS, and the Small Business Administration.

Among the sites that could be subjected to a cleanup are NASA’s launch sites at Cape Canaveral, Fla., where cancer has been found in alligators and dolphins, and Wallops Island, Va.

The E.P.A., Mr. Carper said, proposed that contaminated sites be cleaned up to a level equivalent to the E.P.A.’s current drinking water health advisory of 70 parts per trillion of PFOS and PFOA, citing information provided to his office.

But the Pentagon, in a report to Congress last year, indicated that it believed that an appropriate cleanup level for PFAS would be 380 parts per trillion, or nearly six times the proposed E.P.A. advisory drinking water level. That 380 parts per trillion is also more than 30 times a level suggested as safe for drinking water by the Department of Health and Human Service’s Agency for Toxic Substances and Disease Registry. (One part per trillion is equivalent to one drop of water in 20 Olympic-size swimming pools.)

The Defense Department has also argued that the two variants of these chemicals — PFOS and PFOA — should be counted separately, as opposed to the E.P.A., which wanted the combined total to be used as the groundwater standard, Mr. Carper said in a letter sent this week to the E.P.A.

The Pentagon has agreed to clean up groundwater to the 70 parts per trillion standard, if contamination of either of the chemicals at a site is found above 400 parts per trillion, according to Mr. Carper’s letter. That would mean many sites that would have been subject to cleanup requirements based on the E.P.A.’s original proposal would now be able to avoid such remediation efforts — and costs — potentially polluting drinking water in the future.

“Many of these sites have languished for years, even decades. How can these Americans prosper if they cannot live, learn, or work in healthy environments?” Mr. Carper said in his letter, quoting Andrew Wheeler, the E.P.A. administrator, in his own words during Mr. Wheeler’s recent confirmation hearing, as Mr. Carper urged Mr. Wheeler not to give in to pressure from the Pentagon.

“Please take prompt action to finalize groundwater clean-up guidelines for PFAS that live up to your stated objectives and reject efforts by other federal agencies to weaken them,” Mr. Carper wrote.

Patrick M. Shanahan, the acting secretary of defense, was asked about the matter on Thursday during a Senate Armed Services Committee hearing. Mr. Shanahan told Senator Jeanne Shaheen, Democrat of New Hampshire, where there is also a military-base related contamination problem, that he was not aware if the Pentagon was trying to weaken the groundwater standard. But he said he would look into it “very quickly.”

Frustration is only increasing across the United States as the Trump administration moves slowly to confront the challenge.

Just Wednesday, the Vermont Senate voted 29 to 0 in favor of legislation that would create a new limit on PFAS in drinking water that at 20 parts per trillion is far tougher than even the current E.P.A. drinking water advisory standard. The legislation will also require annual testing by public water systems in the state.

The move was motivated in part by widespread contamination caused by a manufacturing plant in Bennington, Vt., called Chemfab, that once made fabrics and roofing materials coated with the chemicals. Chemfab is now closed.

Maureen Sullivan, the deputy assistant secretary of defense for environment, told a House panel last week that a “very, very rough, back-of-the-envelope calculation” yielded an estimate that the Pentagon was facing a $2 billion cleanup effort. But the price tag depends a great deal on what the government decides represents “clean.”

Heather Babb, a Pentagon spokeswoman, declined to address what specific number the Defense Department is urging the White House to adopt as the new groundwater cleanup standard.

The department “will work in collaboration with regulatory agencies and communities to ensure our resources are applied effectively to protect human health across the country as part of a national effort led by E.P.A.,” she said in a written statement. “However, we do not discuss the details of our interagency coordination.”

A NASA spokeswoman and a spokesman for the White House’s Office of Management and Budget both declined to comment.

Jennifer McLain, the acting director of the E.P.A.’s Office of Ground Water and Drinking Water, declined to discuss the different proposals, but she did not dispute that the E.P.A. and the Pentagon have different points of view.

“Each one of those agencies has a different mission and will be looking at the issue from a different perspective,” she said.

Several state and local governments — including the Security Water District in Colorado, the city of Newburgh, N.Y., and the state of New Mexico — have already filed lawsuits against the Defense Department.

In Oscoda, Mich., a community near the former Wurtsmith Air Force Base, use of the chemicals has polluted drinking water, lakes, rivers and wildlife, and toxic foam now froths on community beaches. The town and the state are battling with the military over how much cleanup should be done.

“It’s just been constant pushback,” he said. “‘It’s not a big deal, it’s going to cost too much, the technology isn’t there,’ Every cause they can think of.”

Eric Lipton reported from Washington, and Julie Turkewitz from Denver.

President Trump’s Retreat on the Environment Is Affecting Communities Across America Dec. 26, 2018