(Interjection – These quotes sum it up: “That’s not a unique situation. It’s exactly the kind of thing that happens to many in the military when they’ve done ‘something wrong’”…., “It’s a personal tragedy for a man who should have had another decade or more of contributing to the future of the nation he loved. It’s a national tragedy in that it clearly shows how Trump is willing to use his power to quash the lives of honorable people who have the temerity to believe that America is what America claims to be.” Underlining is mine ~Don Chapin) 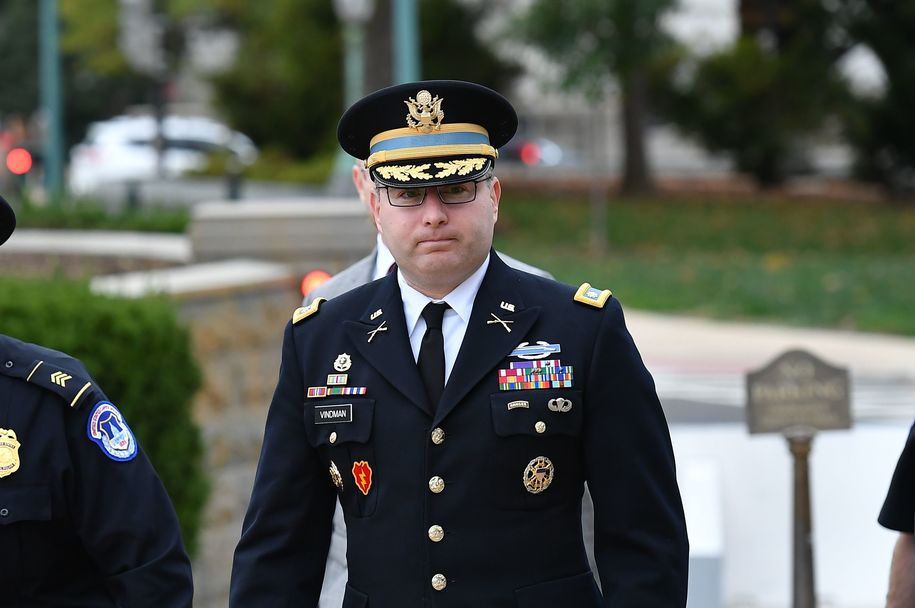 The early retirement of Lt. Colonel Alexander Vindman isn’t the largest story in a nation racked by a deadly pandemic, a fragmented economy, and an ongoing fight to restructure public safety in the face of racial violence by police. No one died in this story. No one was locked in a detention center. No one was pulled before a kangaroo court.

But as more details emerge on Vindman’s final months in the U. S. military, his story does seem to encapsulate so many themes of the last three years. In part that’s because Vindman’s story is the American story—an immigrant who demonstrated that, in America, he could be accepted right in the heart of the government for his expertise. In part that’s because Vindman so clearly placed his bet on honesty and patriotism, trusting in the story of America that America tells itself. And in part it’s because Vindman’s story is the story of Donald Trump’s America, where nothing is more important than vengeance.

Vindman wasn’t kicked out of the military and he wasn’t facing charges—it was just clear that he was facing a future of … no future. The promotion he was due to receive this summer was not going to happen. Worse still, it was made clear to him that his lifetime of experience in working on issues related to Ukraine, Russia, and Eastern Europe was now worthless, because he was not going to be allowed to work in this area. Instead, what Vindman faced was a future of make-work positions, deliberately structured to make it clear both to him, and everyone else, that he was just marking time without the potential for further achievements.

That’s not a unique situation. It’s exactly the kind of thing that happens to many in the military when they’ve done something wrong. Captains who lose a ship, commanders who make a huge tactical mistake, anyone suspected of a crime that can never be quite nailed down … they can end up with a few key words in their files, a “black spot” that’s obvious every time they’re up for promotion or assignment. Facing a lifetime of zero potential and unfulfilling assignments, resignation is the expected response. Those who don’t resign right away, soon realize just how cold it can be within the military when the chain of command turns its back.

The thing is that Vindman got such a black spot without doing anything wrong. As The New Yorker reports, Vindman’s colleagues and supervisors had nothing but praise.

When he went in front of the House to testify in Trump’s impeachment, Vindman began with an opening statement for the ages, one that underscored both his commitment to the nation, and his belief in the character of America. “Dad, my sitting here today in the U.S. Capitol, talking to our elected officials, is proof that you made the right decision, forty years ago, to leave the Soviet Union and come here to the United States of America, in search of a better life for our family. Do not worry—I will be fine for telling the truth.”

In these faded times, it might have almost seemed as if Vindman was being ironic. However, his former boss Fiona Hill makes it clear that the moving statement was exactly as honest as it seemed. “Alex had no clue,” said Hill. “He’s a distinguished soldier and was not involved in politics. He was prepared to deal with the enemy outside, but not when the enemy was within. He was pretty shocked as it played out.”

After being escorted out of the White House, Vindman was slated to be promoted to full colonel, go to the National War College for a season, then return to a foreign posting. None of that happened. Because the White House made it clear that Trump opposed Vindman’s promotion.

Instead, White House officials informed Defense Secretary Mark Esper and Secretary of the Army Ryan McCarthy that they should “dig for misconduct” and find something in Vindman’s record that would justify blocking his promotion. Esper and McCarthy dug. They didn’t find anything.

It didn’t matter. Vindman was made aware that he would not be promoted, and “never be deployable overseas again.” He took the route that many have taken in the past and left under his own power.

It’s a personal tragedy for a man who should have had another decade or more of contributing to the future of the nation he loved. It’s a national tragedy in that it clearly shows how Trump is willing to use his power to quash the lives of honorable people who have the temerity to believe that America is what America claims to be.

After enduring months of “bullying [and] intimidation,” Lt. Col. Alexander Vindman — who courageously testified about President Trump and the Ukraine scandal in the House’s impeachment inquiry — is leaving the US Army.

Trump and his administration have stripped Vindman of his job, his career, and his privacy — all in childish retaliation for speaking the truth. The American people stand with Vindman and thank him for doing this country a great service.

Lt. Col. Alexander Vindman has been strong-armed out of the military after more than 21 years of service — and right now, he needs to know that he has the American people’s support.

Back in February, Trump fired Vindman from his role as the top Ukraine expert on the National Security Council — and had Vindman escorted from the White House, along with his twin brother.

Why? Because Vindman gave explosive testimony during the House’s impeachment inquiry — and revealed shocking details about Trump’s call with the Ukrainian president, where he tried to extort Ukraine into investigating the Bidens.

But Trump’s vengeful crusade didn’t stop there. Even after leaving the White House, Vindman has reportedly been subject to a “campaign of bullying, intimidation, and retaliation” spearheaded by the president. And the White House even allegedly sought to block Vindman’s promotion to the rank of colonel.

Now, this Purple Heart recipient is leaving the US Army altogether – – because he believes his future in the armed forces “will forever be limited” by political retaliation from Trump and his allies.

Vindman is a patriot. He felt, in his words, a “sense of duty” to tell the truth — and no matter what Trump or his Senate enablers do, nothing can change the important truth that Vindman shared.

Right now, we need thousands of concerned Americans like you to send Lt. Col. Vindman your support — and thank him for standing up for what’s right, even when it cost him his livelihood.